To talk about fat is taboo.

Sure, it’s OK to make fat jokes. (See nearly every episode of How I Met Your Mother, which all include some variation of “Sure, I’ll sleep with her as long as she’s not a fatty!” that gets a laugh track and, somehow, an ethical pass every time.) It’s OK for fat people to make fat jokes (or ugly jokes) about themselves.  (See every overweight comedian/enne ever.) It’s OK to talk about fat as an epidemic we must overcome. (See the first post (Part 1) in this series).

It’s OK to talk about fat when it’s representative.  In children’s lore, fat either represented the jolly, good-hearted (grand)parent figure (Santa Claus, Amelia Minchin – the kind sister in A Little Princess, the Fairy Godmother in Cinderella, the easy-go-lucky Balloo in dozens of Disney iterations, the loveable Winnie the Pooh).  Or it signified the evil and, appropriately, ugly character (Ursula in The Little Mermaid, Jabba the Hutt in Star Wars, Mrs. Fratelli in The Goonies).  Or it identified the bumbling fool, obviously equating fat with stupid (Smee in Peter Pan, Gaston’s sidekick Le Fou – “the fool” – in Beauty and the Beast, Little John – again, Balloo – in Robin Hood)*. 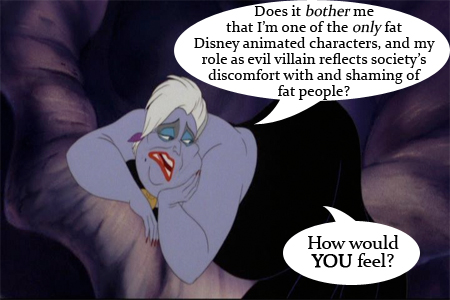 There’s a reason these are representations of children’s literature – for kids, we must exaggerate, simplify, and essentialize to convey the basic points.  Fat was either a symbol of big-hearted loveableness (albeit certainly de-sexualized) or a villain. Regardless, it was never the characteristic or trait of the main character with whom we’re supposed to sympathize or want to become. But in this context, with these limitations, it was OK to talk about these characters and fat.

Of course, symbolic fat wasn’t only in the domain of children’s stories.  It’s also OK to talk about fat when it’s a morality play, when Fat, bombarded by Goodman’s mercenaries Hate and Disgust, becomes a way for skinny people to simplistically represent a lack of control, which most fear (as do we all).

In conversation, if there is an overweight person in the room, we avoid the topic of fat (and let me tell you, that overweight person is aware of the omission – and is even more aware that they are the reason for the omission, which defeats the purpose).  It’s taboo to mention fat when you think somebody might take offense, even if you secretly believe that they should. But in passing, when you’re expressing disgust about the weight gain of a celebrity or making a fat joke, when you think it’s just a comment about that celebrity and not an implicit declaration of your feelings on fat – and, thus, on the overweight person in the room who is overhearing with particular attention – then, you think it’s OK.  But to talk about fat directly? To talk about weight in the lives we live, not celebrity culture or abstract notions of fat? Taboo.

In entertainment, to talk about fat has been to talk about – or depict, visually or verbally – a physical manifestation of a somewhat unrelated problem. Fat was the symbolic representation of kindness or villainy or self-deprecation.  Or, it was simply the problem, not a complex symptom of various and inter-related causes and other symptoms.  The overweight equivalent of the rags-to-riches story (the one that’s OK to talk about because we know that “the problem” will be resolved) was always linear: the fat-to-thin story (and, often, the fat-to-self-acceptance-to-thin story). It was a straightforward problem, manifested in weight gain but resolved in the happy ending: weight loss. Talking about fat in the public sphere typically hasn’t been a presentation of the reality that so many of us deal with: fat with multiple causes and effects, fat with a circular path of self-hatred into perpetuity. 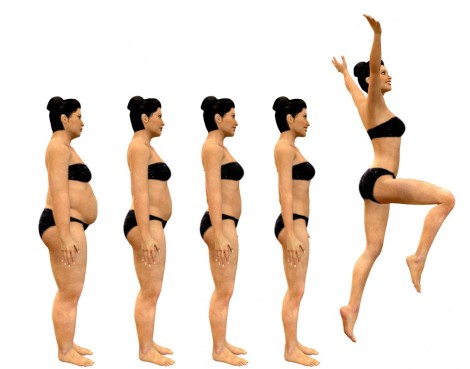 But can these rules change?  Are they changing? Slowly, I’ll admit, but shifting nonetheless? I hope so.  The past few years have seen a surge of plus-size actors and actresses, especially.  We’ve always had our John Candys and our Chris Farleys and our (now slimmer) Jonah Hills.  But in the ’90s women like Roseanne launched our new, sassy Melissa McCarthys and Rebel Wilsons and Queen Latifahs  (as I’ve discussed in previous posts; check ‘em out).   These are powerful women making a splash as beautiful women.  Praise be. The presence of these actors and actresses doesn’t mean that the conversation surrounding the culture of fat has necessarily changed; in fact, I’ve argued that many of their roles capitalize on the objectification of their bodies in true Hollywood style. And a lot of talk about them has either ignored these problems or contributed to them. But perhaps it can start to change.

Enter bloggers.  There are more blogs, more plus-size people talking about their own experiences and their reactions to these happenings in pop culture.  More and more, everyone is turning to the internet; authority has been disseminated from larger media venues and is taking residence in personal opinion and first-hand accounts.  The more we expose something, the less taboo it becomes.  The more we learn how to talk about something, the more we can understand it.  And the more we discuss this something with the people affected by it, the more hope we can have for acceptance, understanding, and change – hopefully at the cultural level but certainly at the personal.

But in other entertainment arenas, perhaps we’re also getting a chance to see more complexity. Last week, I wrote about Jami Attenberg’s new novel The Middlesteins, which centers around the morbidly obese patriarch Edie. The novel examined the diverse ways in which obesity affects relationships and how different thoughts about weight can help define characters (view post here to read more).  The November 19th issue of The New Yorker featured a theater review by John Lahr titled “Supersize: Precocity and Obesity Onstage.”  After reviewing the new Broadway production of Annie, Lahr focued on Samuel D. Hunter’s The Whale, a story about a four hundred pound gay man named Charlie, an online English composition instructor confined to his couch by his weight: “Wedged between the armrests of his sagging seat like a Macy’s balloon between buildings, Charlie is literally and symbolically stuck.” Most of the online commentators and reviews I saw reacted negatively to this representation, which was very clearly an exaggeration of inner turmoil made visual.  But theater often allows us to see problems through hyperbolic means, and at least this play seems to still deal with the complex issues and relational problems surrounding it. Lahr comments, “Charlie’s larger blindness is his failure to see that his obesity is an attack not only on his shamed self but on the world. He says that he wants to make a connection with Ellie [his daughter] and with others, but his monstrous body is a fortress of refusals, including the refusal of intimacy.” Here we have the body as representation – but at least a complex one.  What would happen, then, if Charlie wasn’t blind to these facts?  If Charlie was aware of his obesity as self-destruction but still couldn’t stop?

And what would happen if this reviewer understood that, too?

Maybe we could talk about it.
*I am very (parenthetical) today.

Theatre Review: Supersize by John Lahr in The New Yorker

Don't be shy. We want to talk to you, too. "Weigh in" on the Conversation: Cancel reply

EMAIL US: Have a conversation topic? A question? A private comment? A humorous anecdote? A desire to give us a million dollars? Let us know.

People in the Conversation